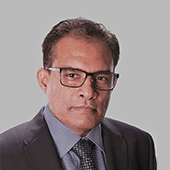 Dr Vallapan Thiruvilangam is an anatomical pathologist with special interest in breast, pulmonary, gastrointestinal and skin pathology, whilst also being involved in other areas of pathology. He graduated from University of Jaffna, Sri Lanka, and completed his MD at the National Hospital, Colombo, (University of Colombo) in 2000. Dr Thiruvilangam immigrated to Australia in the same year, and completed his residency in Queensland in the year 2002. He then further trained in anatomical pathology and cytopathology at Westmead and Nepean Hospitals and Douglass Hanly Moir Pathology. During this time, Dr Thiruvilangam was involved in teaching and conference presentations. In January, 2008, he joined Davies Campbell de Lambert as a histopathologist, where he was involved in teaching and laboratory management. Dr Thiruvilangam joined Douglass Hanly Moir Pathology in May, 2017.