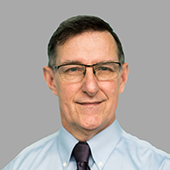 Dr Michael Rodriguez graduated from the University of Sydney with first class honours and trained in anatomical pathology at Royal Prince Alfred Hospital. Following 12 months as a senior registrar in neuropathology at the Royal Perth Hospital, he spent 10 years in the United States. Dr Rodriguez was a Research Fellow in the laboratory of Professor Elias Lazarides at the California Institute of Technology Division of Biology, working on animal models of Alzheimer's disease. He subsequently held positions as a Visiting Assistant Professor of Research Pathology in the School of Medicine at the University of Southern California, a Clinical Fellow in Pathology at Harvard Medical School, and a Research Fellow in Medicine at Massachusetts General Hospital in Boston, studying genetically determined neurodegeneration in zebrafish. During this time, Dr Rodriguez trained in and was Board Certified in both anatomical pathology and neuropathology. Returning to Australia in 1997, he worked as a neuropathologist at the Department of Forensic Medicine in Sydney until 2015. He joined Douglass Hanly Moir Pathology in 2011 as a Consultant Neuropathologist, with experience and expertise in adult and paediatric surgical and autopsy neuropathology. He has contributed to a number of papers relating to neuropathology and neurobiology and co-authored the chapter on diagnosis and pathology in the Cancer Council Australia's Clinical Practice Guidelines for the management of adult gliomas: astrocytomas and oligodendrogliomas (2011). He was the lead author on the first edition of the RCPA Central Nervous System Tumours Structured Reporting Protocol (2011).