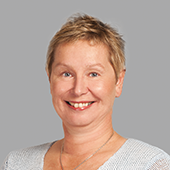 Dr Marcella Roman came to Australia from Czechoslovakia (now the Czech Republic) at the age of 13. She is a graduate of the University of Sydney (having been a student at Royal North Shore and Royal Prince Alfred Hospitals). Dr Roman spent a short time as a family medicine trainee at Hornsby Hospital before discovering pathology. She completed her pathology training at St George and Royal Prince Alfred Hospitals. Dr Roman has been with Barratt & Smith Pathology since 1987, except for a short break in
1992–1993, when she spent six months working in Sweden.