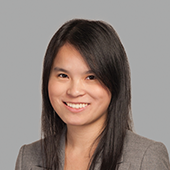 Dr Lisa Lin graduated from the University of New South Wales in 2004. She commenced her anatomical pathology training at John Hunter Hospital, Newcastle, after which she was based at Westmead Hospital, Sydney, for the latter four years of her pathology specialist training. Dr Lin also gained experience working at different public and private laboratories, through rotations to BreastScreen NSW, Douglass Hanly Moir Pathology, Royal North Shore Hospital, Nepean Hospital and the Department of Forensic Medicine, Glebe. She completed her FRCPA postgraduate studies in January 2012, at which time she joined Douglass Hanly Moir Pathology as a histopathologist and cytopathologist. Dr Lin has a special interest in breast pathology and urological pathology. She has been involved in a number of publications in peer-reviewed journals and conference presentations, as well as co-authoring a textbook chapter in a 13-volume series involving 150 experts, representing 12 countries. Dr Lin is currently an Adjunct Senior Lecturer in Pathology at the School of Medicine, University of Notre Dame, Sydney.