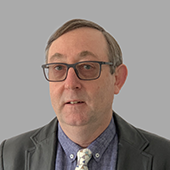 Dr Greg Rhodes is a graduate of the University of New South Wales, where he later worked as a lecturer in pathology, from 1986. He completed a PhD in experimental respiratory pathology before obtaining his Fellowship in anatomical pathology in 1993. Dr Rhodes joined Barratt & Smith Pathology in 1994, following a year as a Senior Registrar in Pathology at John Radcliffe Hospital, Oxford. He is now based in our Orange Laboratory, where he works as a histopathologist, with special interests in dermatopathology and breast pathology.