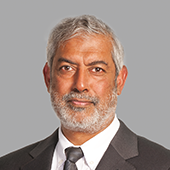 After graduating from the University of Natal, South Africa, Dr Desmond Reddy worked in Durban, at the King Edward VIII Hospital and the University of Natal Medical School. In 1982, he moved to New Zealand with his family and spent three years in general practice before completing his training in general pathology at Auckland Hospital. Working in both the private and public sectors, Dr Reddy held positions at Medlab Auckland, Auckland Hospital and the University of Auckland Medical School, at the latter of which he was a part-time Senior Lecturer, before taking up the position of Medical Director at Northland Pathology Laboratory in Whangarei, in 1998. Northland Pathology Laboratory provides diagnostic services to the Northland region, including anatomical pathology and haematology to Northland Base Hospital. During this time, Dr Reddy was also an assessor for IANZ (International Accreditation of New Zealand). After a short locum at Auckland Hospital, he crossed the Tasman in 2006 and is now based at our laboratory in Gosford. His major role is in histopathology and haematology, and his areas of special interest are oral pathology, uropathology and haematology.