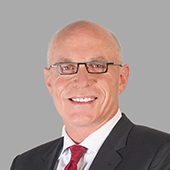 Dr Colin Goldschmidt is the Chief Executive Officer of Douglass Hanly Moir Pathology and its parent company, Sonic Healthcare. He is a pathologist by qualification but spends his time in corporate and laboratory management. Dr Goldschmidt trained in pathology at St George, Royal Prince Alfred and St Vincent's Hospitals, obtaining his pathology Fellowship in 1986. He joined the Douglass practice in 1987 as a histopathologist and became Medical Director in 1989, before being appointed to his current management positions in 1993. Dr Goldschmidt has based the global expansion of Sonic Healthcare on a unique platform of Medical Leadership and has committed Douglass Hanly Moir Pathology and all Sonic Healthcare subsidiaries to a rigorous strategy of professional excellence, staff fulfilment and ethical practice.