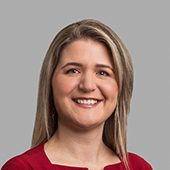 Dr Caroline Kurek graduated with a Bachelor of Medical Science, majoring in Pathology, with First Class Honours, from the University of Sydney in 2005. She spent two years with the Sydney Cancer Centre and the Blackburn Institute, Sydney, working in prostate cancer research before studying Medicine, graduating in 2012. She completed the majority of her anatomical pathology specialty training at Douglass Hanly Moir Pathology (DHM), with rotations to Australian Clinical Labs, Concord and Royal Prince Alfred Hospitals, as well as the Department of Forensic Medicine, in Glebe. Dr Kurek obtained Fellowship from the Royal College of Pathologists of Australasia (RCPA) in September 2021, and commenced her role as an Anatomical Pathologist at DHM in October 2021. Dr Kurek reports general pathology with special interests in dermatopathology, cytopathology, breast and gynaecological pathology. She has been heavily involved with the teaching of scientific officers, medical students and registrars throughout her time at DHM.