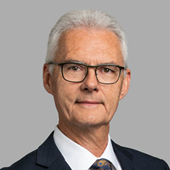 Adjunct Professor Warick Delprado is a graduate of the University of Sydney. He spent his pathology training at Westmead Hospital, after which, he held the position of Staff Specialist Pathologist, first at Liverpool Hospital and later at St Vincent's Hospital, Sydney. Adj. Prof. Delprado joined Hanly Moir Pathology in 1991. His special areas of interest include genitourinary pathology and cytopathology. He has published many articles, mainly in the fields of genitourinary and gynaecological pathology. Adj. Prof. Delprado has served on several Royal College of Pathologists of Australia committees, as well as State Health Department and Cancer Institute policy and advisory committees. He is a past President of the Australasian Division of the International Academy of Pathology. Currently, Adj. Prof. Delprado is involved in several studies on prostate cancer. In 2004, he was elected Fellow of the International Society of Urological Pathology (ISUP). Adj. Prof. Delprado was a member of the ISUP Consensus Committee on Gleason Grading. As part of Douglass Hanly Moir Pathology's commitment to medical education, he is an Adjunct Professor of Pathology at the School of Medicine, University of Notre Dame.