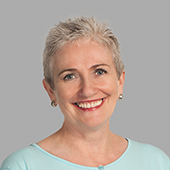 Adjunct Professor Fiona Bonar graduated with honours from the National University of Ireland in 1977. Having first trained in the clinical arena, she is also a member of the Royal College of Physicians of Ireland and holds diplomas in both paediatrics and obstetrics. Adj. Prof. Bonar began her pathology training in Ireland at Trinity College, Dublin, and subsequently studied in the USA, where she was Resident and Chief Resident in Anatomical Pathology at the New York-Presbyterian Weill Cornell Medical Center. She completed a Fellowship in Musculoskeletal Pathology at the Hospital for Joint Diseases, New York, and migrated to Australia in 1990, joining Douglass Hanly Moir Pathology in 1993. Adj. Prof. Bonar has a particular interest and expertise in the histopathology of bones and joints, soft tissues, head and neck, and breast. She has contributed to the literature on a variety of topics, mostly related to musculoskeletal disease. She is also a member of several editorial boards of international specialty journals, participates in a number of national and international clinicopathological groups and is an Honorary Consultant in Orthopaedic Pathology at Royal Prince Alfred Hospital, where she has been the Curator of the New South Wales Bone Tumour Registry. Adj. Prof. Bonar has been honoured by admission to The International Skeletal Society, in which she is an active member. She holds the positions of Adjunct Professor of Pathology at the School of Medicine, University of Notre Dame and Clinical Associate Professor, Macquarie University Hospital.