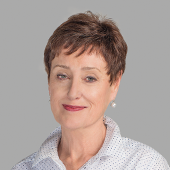 Adjunct Professor Annabelle Farnsworth is a graduate of the University of Sydney and trained as a histopathologist at Royal Prince Alfred Hospital. She was Director of Anatomical Pathology at the Royal Hospital for Women, Paddington, for two years and spent four years in private practice before joining the Douglass practice in 1994. Adj. Prof. Farnsworth is a specialist gynaecological histopathologist and cytopathologist and is Director of Cytopathology at Douglass Hanly Moir Pathology. She is well known throughout Australia and internationally for her contributions to cytology and gynaecological pathology. Adj. Prof. Farnsworth is a past President of the Australian Society of Cytology and a member of the Executive Committee of the International Academy of Cytology. Presently, she holds the Douglass Hanly Moir Chair in Pathology at the School of Medicine, University of Notre Dame. Adj. Prof. Farnsworth has published numerous papers and is co-author of a respected textbook on ovarian pathology. In January 2000, she was appointed to the position of Medical Director of Douglass Hanly Moir Pathology. In this capacity, she is more than happy to assist doctors with any enquiries relating to the practice. In 2013, Adj. Prof. Farnsworth was awarded an Honorary Fellowship by the Royal Australian College of Obstetricians and Gynaecologists.