All patients must have a pathology request form for coronavirus testing prior to calling our COVID-19 Booking Hotline on 1800 026 622 (9am–5pm Monday–Friday) for an appointment. 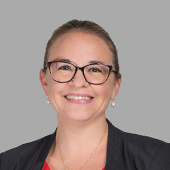 Dr Kym Mina is a medical graduate of the University of Western Australia, with a PhD in epidemiology that was supported by an NHMRC scholarship. She was awarded her FRCPA in genetics in 2012, having attained broad experience in both molecular genetics and cytogenetics in Perth, WA, and Christchurch, NZ.

Dr Mina's keen interest in translation of new technologies to routine genetic testing subsequently led to a Fellowship year with PathWest Laboratory Medicine WA, to develop a data analysis pipeline for diagnostic whole exome sequencing. As a reflection of her public health experience, she conducted the RCPA Genetic Testing Survey 2011, which assessed national genetic testing patterns and funding. Dr Mina also has longstanding involvement in the teaching of undergraduate and postgraduate medical and science students and, more recently, supervision of pathology trainees.

A passion for building relationships between clinical services and the laboratory has resulted in Dr Mina's prominent involvement in several multidisciplinary teams, including the Undiagnosed Diseases Program in WA. She moved with her family to join Douglass Hanly Moir Pathology as Director of Genetics in early 2017.