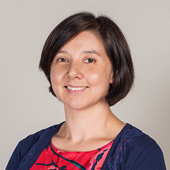 Dr Joanna Ding developed an interest in pathology as a medical undergraduate at the University of New South Wales, where she was a recipient of the Sugerman Prize for Experimental Pathology. She trained as a general pathologist at Canberra Hospital, primarily working in the areas of anatomical pathology and haematology. After obtaining Fellowship of the Royal College of Pathologists of Australasia, Dr Ding spent six months, in 2003, working at the British Columbia Cancer Agency, Vancouver, as part of the Molecular Pathology of Cancer Training Programme, funded by the Canadian Institutes of Health Research. Returning to Australia, she took up the Cytopathology Fellowship position at the Victorian Cytology Service to further pursue her interests in cytopathology. Having completed that Fellowship, Dr Ding joined the team at Douglass Hanly Moir Pathology. She considers her main areas of interest and expertise to be cytopathology, histopathology and haematology. Dr Ding is currently an Adjunct Senior Lecturer in Pathology at the School of Medicine, University of Notre Dame.